So I’m sat here in the Refugio of Margalef trying to contemplate the rollercoaster the last few months have been.  The last time I wrote was after the first round of the Youth Climbing Series at Surrey Summit.  We really did not know what to expect there, me and Be knew the White Spider Squad were on form, but to come back with 8 podiums was outstanding and really raised the bar of what to expect.

The next round was at Craggy Island, as always Craggy went beyond the call of duty in perfectly preparing the centre for us.  All that was left was for me and Tanya to get the volunteers together, brief everyone and try and make the day go smoothly.  It did, not only from the view point of an organiser but also as a coach.  Mark Croxall set the perfect series of routes, each building up to test the climbers technically and physically whilst at the same time keeping them completely inclusive for the less experienced competitors.

As a Coach the Squad once again raised themselves to the occasion, Nat continued his rain of incredible form taking 3rd in Boys A, Lucy and Holly were unstoppable in Girls B taking 1st and 2nd.  Chris is still to fall off a route taking an easy 1st.  Beth continued her amazing run taking 2nd in Girls C and in the little-uns Ella took a well deserved 2nd in Girls D and Lucy and Lia continued their run of great form in Girls E with a 1st and 3rd. 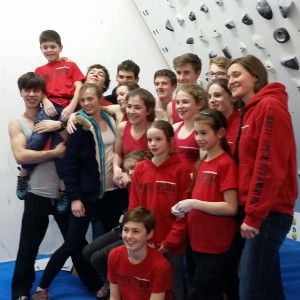 This just mounted the pressure for the 3rd round and decider of who is going to Ratho.  Being held at our home wall White Spider you would hope for a home advantage.  But nerves were high.  Only Lucy and Chris had a definite ticket to the finals, all the other could fall at the last hurdle if they made a mistake.  Our fears were underserved and once again they smashed it producing an almost identical result to the last 2 rounds and guaranteeing 8 of the squad going through to Ratho in Edinburgh in April.  To top this this I’ve two clients also qualifying taking it to 10 the total that I coach heading to Scotland. 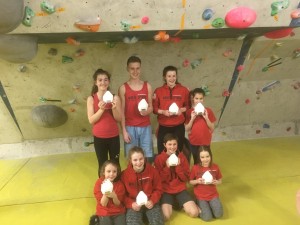 Series Trophies at the White Spider Round

Whilst we put the final preparations to get those 10 fit and ready for Ratho, Onsight Coaching has been steadily growing.  March has been an exciting month with the launch of our i-climb training programs.  These off the shelf training programs come in Intermediate and Beginner packages and nicely complement our bespoke training and coaching programs I currently provide.  The last big event of March is the first of our Coaching Holidays!  Teamed up with Be from Be Climbing we’re introducing first 16 climbers to the pocketed limestone of Margalef.  Then on their departure we’ve 6 of the White Spider Squad arriving for their first taste of continental limestone.  To top this very exciting month I climbed my first 8a on Friday with a very quick redpoint of Liquid Crystal at Cheddar. 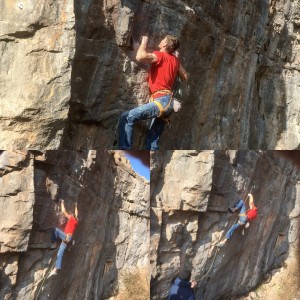 If the rest of the year is as good as these first 3 months have been, it’s going to be exciting!