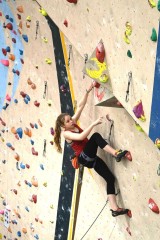 At the start of this year I was approached by Robin O’Leary to see if I could take over from him as Area Youth Coordinator (AYC) for our region, this was quite a daunting prospect. Involving organising 3 rounds of the Youth Climbing Competition Series (YCS) to some of the best climbers the South East had, but it sounded like a pretty fun challenge.  These climbing competitions brought together first time competitor to seasoned (if still very young) competitors.

Luckily to help me was Tanya Sage, a fantastic administrator; we soon developed a brilliant working relationship. Tanya organising the background bits and pieces and me ensuring a regular supply of volunteers for the climbing competition and being on feet on the day ensuring the day went smoothly. We also had as chief judge Mark Alderson a highly respected adjudicator who was vital for the smooth running of any technical judging dispute. 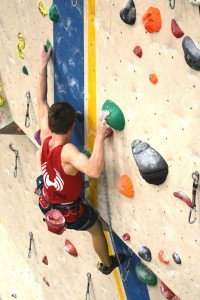 The first round was at Craggy Island, as expected Danie and Mark put on an excellent show, setting incredible routes and boulder problems and taping every hold, leaving just the organising of the day to me and Tanya. As well as my AYC role I was keeping an eye on our White Spider performance squad. With the top 5 climbers from each category qualifying for the final round at White Spider every point and position mattered.

The squad didn’t disappoint, with podiums from Imogen Horrocks, Freddy High and Holly James and many others making top 5 positions it was a great round for White Spider. 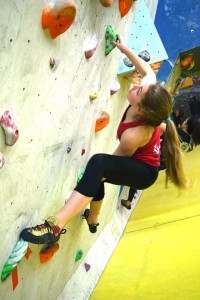 Lucy pulling hard at YCS round 3

As AYC the round went very smoothly a bit of shuffling around climbers at bottle necks and unfortunately a couple of judging disputes which needed settling but a great day, helped massively by fantastic organising by Craggy Island.

The next round moved to Surrey Sports Park and Johnny Adam’s team, once again the organisation from them was first rate, with James Garden leading the route setting we once again had an interesting set of boulder problems and routes.

At this round the White Spider performance squad was going to have to pull everything out to qualify for the third round. They didn’t disappoint with everyone having an amazing performance and podiums from Lucy Garlick, Tom Kolasinski, Holly James, Imogen Horrocks and Freddy high. With other squad members coming 4th and 5th.

Once again a great round, thankfully slightly fewer judging disputes, but more super final climb offs, as the competition was so close for those final 5 positions for round 3. 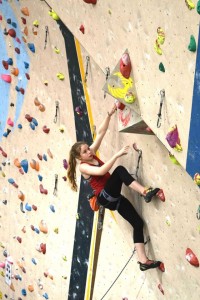 Lucy on lead in YCS round 3

Round 3 looked like it was going to be exciting, With Liam Halsley, Yann Genoux and Stew Terry taking 3 days setting an amazing array of routes and boulder problems. With the White Spider team making sure the event was going to be perfect, even sourcing climbing prizes for those making the podium.

There were more than just the podiums to climb for in this round. The top 3 from each category would go to the grand final in Ratho, Scotland and represent the region there.

This round wasn’t going to be White Spiders day for Podiums, with two of our squad competing ill and one out with an injury it was left to Lucy Garlick to make the podium for White Spider taking 2nd place in a hard super final on a tough 7a route. Not bad for just 8 years old! However, that was only half the picture, with squad member putting in extra hours of training in preparation for the competition many in the squad had the climb of their life. Matt Davies and Ryan Caby taking a very respectful 4th and 5th in Boys A and Nat Hudspith and Freddy High 4th in Boys B. In the girls Lucy Rattue and Holly James had a tough round finishing 6th and 8th and Tom Kolasinski finishing 9th in Boys D.

Thanks to the amazing organisation from White Spider and terrific routes from their team this was another great round.

Although the prospect of being AYC this year was very daunting, I’ve enjoyed the challenge as much as I hoped and am really looking forward to more of the same next year.

Good Luck to all the London and South East climbers heading to Ratho in April!

Photos thanks to and copyright to Imogen Horrocks