The drive down was ominous, rain and black skies, not what you want for your first Sports Climbing Workshop.  Guy and I thought long and hard about what we wanted this day to be.  We didn’t want it to be another SPA style day of top-roping and if you are lucky a lead.  We wanted to pass on the knowledge we’ve acquired over the last 15 years of climbing and above all, it to be fun.  Now it looked like it wouldn’t happen. 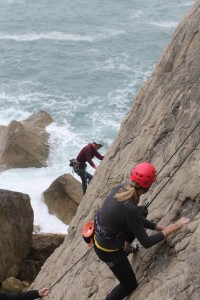 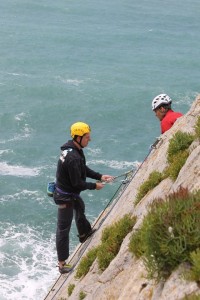 It may have stopped raining when we got to Portland and met the 6 climbers who would be learning from us.  But the fog was thick and a lot of the routes still very very wet.  For the morning Guy and I where to split the group.  Guy delivering a redpoint tactic workshop while I focused on slab movement and leading skills, culminating in threading through practice and tutorial.  With just enough dry routes we headed off to our respective areas to begin.

I chose the classic routes on ‘Fallen Slabs’ to go through slab climbing technique, trusting your feet and building them up gradually, shifting your centre of balance to ensure each foot was glued to the rock before progressing up.  Guy’s focus was the classic 7a ‘To Wish the Impossible’ breaking down the route into sections and focusing on the linking them together and wiring the difficult sequences.  Hard sections where repeated multiple times and the exact hand and foot sequences memorised.  A strategy often rushed by many climbers.  With the route wired both Ben and Andy put a solid redpoint effort to climb this incredible 7a.  Meanwhile on the slabs Dave made his first outdoor leads and then practiced his threading through while Caz, Cameron and Jacqui dialled those precise feet needed for technical slab climbing. 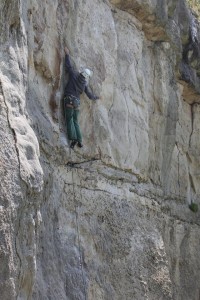 Ben on his successful redpoint of ‘To Wish the Impossible’ 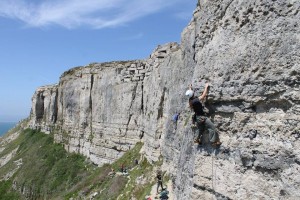 Andy figuring out the sequence on this fun onsight in Portland

With the morning sports climbing workshops done the sun finally made an appearance just in time for a lunch break and some time to relax and enjoy the view.  The afternoon was split again, this time with Guy taking one group on a technique and tactics workshops while I looked into onsight tactics with Ben and Andy.  Often in climbing it’s the tactics that get thought of last.  However, after technique they can often make the biggest changes in your climbing.  Being able to read a route, identify key sequences, rests and important clips are vital. 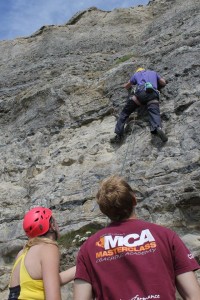 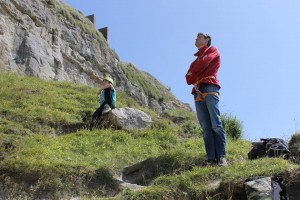 The two routes we chose to learn on where a steady 6a+ were we could observe the holds easily from the ground and work out the general direction and important section of the route.  Then the classic 6c+ ‘Turned to Stone’.   In both routes Ben and Andy nicely identified the crux sequence and identified many of the key holds.  On the route simple errors in clipping, resting and route reading led to falls, but in the process clearing identifying areas to work on.

Our next Portland Sports Climbing workshop is September and both Guy and I are excited to get back on the rock coaching together.  The syllabus will be interesting and varied throughout the day, giving key and important skills that let all climbers progress and improve in the sport they love.

Or take a holiday in France for our Fontainebleau Bouldering Workshops