I’d been twice before, once when it was wet and I was not good enough to enjoy the incredible routes here and another time with a shoulder twinge, which likewise left me incapable of enjoying this spectacular place. 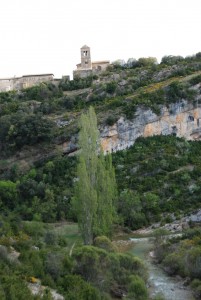 Rodellar village perched above the gorge

For those that aren’t familiar with Rodellar it sits at the end of a single track road, a small Spanish village perched atop of a deep rock gorge. With a small river running through the gorge the sides are filled with steep caves, rock arches and towering cliffs. It’s the land of steep climbs, some short and steep others long and steep, but generally very steep! 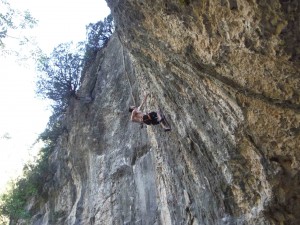 For all these reasons I was excited to be heading back for another trip and staying at Kalandraka. I managed to squeeze in a few cheeky stamina sessions on the training board at Whitespider in the hope that I would have just enough in my arms to get up some of the routes there. With my climbing going nicely in the right direction over the last few months I was optimistic I could climb some interesting routes, but with the caveat that I would need to get route fit pretty quickly on arrival to achieve this. 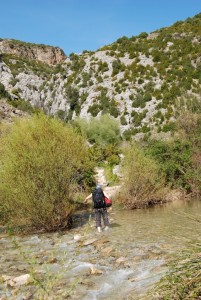 Walking through the gorge

My caveat was right! I got very pumped, I loved the climbing there. But the steepness and my onsight fitness levels led to a lot of air time once I hit a hard move which my pumped arms would not let me climb past. The first few days where spent in this pattern, a few steady onsights in my comfort zone then as soon as I upped the grade and hit a harder move I pumped out, not fit enough. Then usually steadily dispatching the route on my first redpoint. But the routes where so good it was hard to be disappointed!

After 3 days of this pattern a rest was needed, luckily the gorge is so beautiful a day wandering back and forth between sectors belaying friends and chilling is perfect to recover. 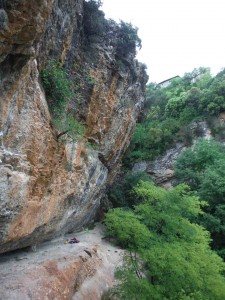 The Rest day definitely did the trick, rejuvenated we headed back out to climb, unfortunately it was raining! Luckily the routes in Rodellar are pretty steep and the majority where left untouched by the rain. Although our warm up was a big soggy at the top. The aim of the day the classic long and pumpy route Egocentrismo, (7c) 25m of very steep climbing. After quickly bolt to bolting the route and figuring out the moves my first redpoint ended in a fall when a sequence I hadn’t fully worked failed. A quick play and discovery of a cheeky heal hook solved that problem and the route went next go. I finished with plenty to spare in my arms and a feeling that my fitness was finally returning.

That was definitely the highlight of the trip, the next day was our last, a quick play on the classic rock arch of El Delphin was fun, but poor redpointing skills left me dangling on the rope at the crux and with no time left we had to dash for our flight. The trip was a revelation to me in terms of what I can get done in a short trip and what I could potential achieve in a longer one! Next April I will be back for more!

A short (and bad) video of a few routes at Sector Aquest any Si, we did quite a bit of climbing with Tobias who climbs Rebellion en la Granja (8a) on the left and Axio who climbs Caprichos de lujuria (7b) on the right.

Rodellar, Spain. May 2015 from Jon Redshaw on Vimeo.